British DJ Producer Chris Liberator is considered one of the ‘founding fathers’ of Techno and Acid Techno. Together with other London partners he grew in punk-reggae-parties until electronic music, when he found himself in love and became an international icon.

His music is played in the whole world for decades and his influence is immeasurable. Besides being a DJ, playing in two bands, he also runs 909london and Stay Up Forever labels. I saw this guy first time back in 2000, vinyl only presentation, obviously. It was unforgettable. Fast mixing, lots of energy spent, very contagious. Now, he’s back in Brasil and we had a talk.
Check it out!

Tell us 5 songs u have in your car today. (or 5 songs you’ve recent and frequetly listened to

haha,my car stereo is broken so can only listen to the radio…so commercial stuff only,though me and my 11 year old daughter do like Riton ‘Rinse and Repeat’ as it’s got acid in it and some cool wonky bass, and reminds me a bit of Brazilian band CSS, and Years and Years ‘King’ as it’s catchy and has interesting and intelligent lyrics!! Other songs i like at the moment are Anthrax (UK punk band) new single on Grow Yer Own, Secret Hero’s ‘Sylmar Acid Test’ (my fave Acid Techno record of recent times), and anything by the Skints (London reggae band) whose latest album is brilliant, as are all their albums..

Last time you played in Curitiba it was The Acid Eaters Collective 10 year party. What has (IF it has) changed in your music Well, I’ve gone back to playing a lot of Acid Techno again, as there’s a ton of good new stuff, and a lot of newer producers now who are really into it and flying the flag!! I still love my techno but its so slow now and difficult to play alongside the faster acid tek stuff ;except in really long sets like i did last year at Techno Route). Hard groove has disappeared so there’s very little 140/135 bpm techno around so its very slow techno or very fast acid techno, i usually play that as it’s more energetic and floats my boat more than the 125 techno which borders on house(old man music ha ha!!)

You are DJ, Producer, Party man, run a label, what is quite a lot. How do u find time to do all that and event have time for kids and family I’m struggling, time is the thing i do not have much of, never enough these days

Considering all this, in what have u been MORE active lately
My daughter is 11 and a budding actress, her rehearsals and out of school dance and drama eats up a lot of spare time, with a baby too it is quite difficult at the moment. The online record store is a fair amount of work as its only me and Aaron running it (and all the labels and production), same with 909london where it’s just me and Jethro, so i’ve had to concentrate a lot on both of these recently as the release schedule is constant .With gigs at weekends, and 2 punk bands (Dogshite and Hagar The Womb), my studio time for techno is very limited but i still try and get at least one release a month made if i can.

From that TECHNO of 2002 to what people are calling techno now, how would you explain its differences.
It’s really slow now, almost like House music which is fine, but it’s a shame the energy and some of the impetus has gone to a degree. There are some great producers and some very good techno being made but it’s hard to combine with UK acid techno/techno which has remained fast and upbeat 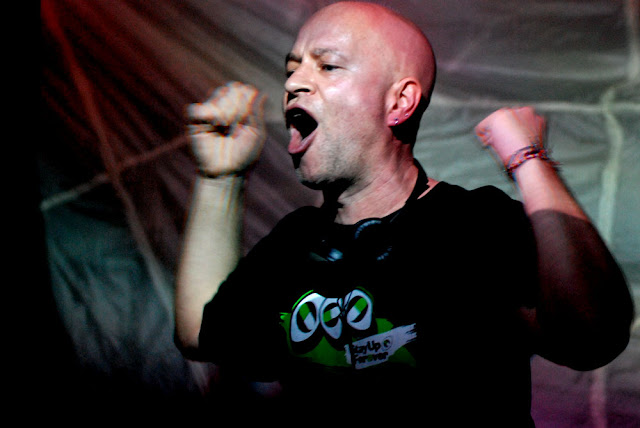 We have published here in the PHOUSE website a story where we`ve mentioned the squat parties and the STONKA, which you were the responsible, How is all that scene going?
There has been quite a lot of problems with police shutting down parties and confiscating rigs. A lot of London is now prime residential areas so not so easy to find disused buildings and squat them for parties. Having said that, there are still plenty of rigs up for it and last weekend there was a pretty good, small squat party which i missed but i heard was banging!!The spirit is still there for sure!!!

People are very excited to listen to you again here in Brazil. What can we expect?
I’m not sure yet, of course, plenty of the latest new school acid techno, but not certain whether i will start with some slower techno or just slam in with some more energetic London style techno..expect a few classics,all played on vinyl of course!!!

You have played in BIG FISH once or twice, share a memory with us please
Always love playing for Big Fish and Vibe, the crowd last time were brilliant, and those that stayed the distance until the very end, (way past when i was supposed to finish) were just amazing ,a lot of smiles!!!

Please share some of your future works and partners . What can we expect to see from Chris Liberator?
Been working a lot with Guy Geezer again, have quite a lot of stuff in the pipeline including a new track on Corrosive 007. Also been working with Steve Mills, the new Brain Gravy will be me and him on special pic disc so watch out for that. Had some sessions with Henry (D.A.V.E.) where we have been doing our Ha-lo project again which has been fun,more slower and funkier stuff,we’re hoping to get an album’s worth of tracks finished this year. Also more stuff with Fly from the Dice, Darcmarc, Sterling, and hopefully some solo stuff once i sort out a new studio which me and Aaron are hoping to set up at the SUF hq in hackney (if we ever get the time!!!)I love the collaborations but i’m determined to get in and do some long overdue solo stuff in next 24 months…just time,or lack of it, but where there’s a will there’s a way!!!